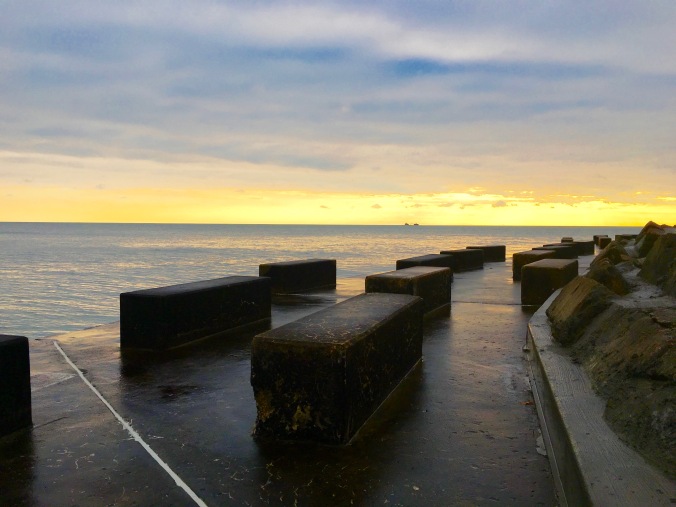 You might have noticed that dia[loge]s has been rather quiet lately. For that, I apologize. I’ve had some major life changes that I feel obligated to share here.

Last month, my stepfather—a kind, deeply devout man who was part of my life for ten years—chose to end his own life. (I mentioned his death in passing here, but couldn’t bring myself to write more at the time.) The news was a shock, and the grieving process has been messy. It suffices to say that my life has changed in ways I’ve yet to begin to comprehend or process, and many things—even the things I once loved to do—seem trivial at the moment.

Oddly enough, I’ve found that the only work I can readily bring myself to do after his death is at the Chicago Maroon, the student paper of the University of Chicago. The new calendar year ushered in a new stage of my involvement with the paper, too, when I became a full editor for the Arts column. It means more editing/organizational work and less writing, but I’ve enjoyed every minute of it. It feels like catharsis, or something like it.

In the meantime, though, other writings have since been scaled back and will remain so for the time being—my work for Larry Johnson’s superb Chicago Classical Review, for one, and this blog. (On the contrary, I have gotten more vocal on Twitter recently—call it the cult of convenience.)

Looking ahead, I’ll be spending only a few more months in Chicago this year: I’ll stick around until June to close out the school year, at the very least to take a course co-taught by Lyric General Director Anthony Freud next quarter (which I couldn’t be more excited about). After that, there’s a chance dia[loges] will be California-based all summer, when I go home to the Bay Area and MJ (potentially) works in LA; in autumn, I’ll be in Vienna studying abroad and will probably use dia[loge]s for writings, pictures, and other mementos.

But that’s all in the future. For now, I’m taking things one day at a time. 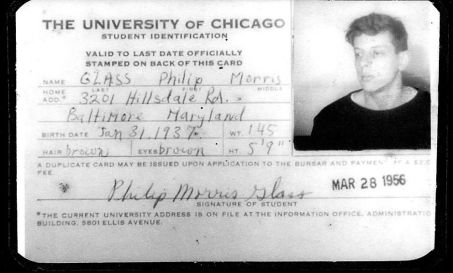 Last weekend, minimalism’s reluctant hero returned to his alma mater. My meager coverage for the Maroon doesn’t quite encapsulate the philosophical potency of Mr. Glass’s residency, though I feel fortunate to have attended all of the events and gotten the chance to speak to the composer himself.

The day after our conversation, I was listening to the Kronos Quartet’s recordings of Glass’s quartets when I realized just what it was about Glass’s music I found so compelling. It doesn’t assert itself, selfishly demanding your undivided attention. Rather, it embraces and enhances the world as it—like his music—slowly, inexorably moves around you.

So often artists present audiences with a canvas to survey. For me, Glass’s music is the lens through which we view that image. The image itself is one of our own creation. 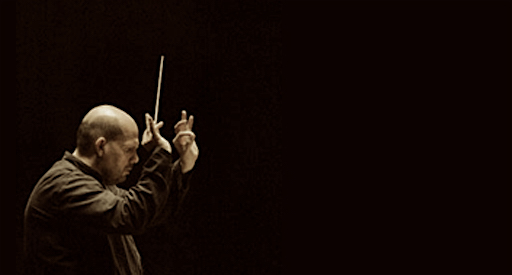 Jaap van Zweden will succeed Alan Gilbert at the New York Philharmonic in 2018.

A big month in classical music news. In Chicago:

Both entities, on the whole, seem to be plugging in much the same creative direction as last season—which is to be expected—but their programming already seems more promising than 15/16 did this time last year. Autumn couldn’t come sooner, but first…

END_OF_DOCUMENT_TOKEN_TO_BE_REPLACED 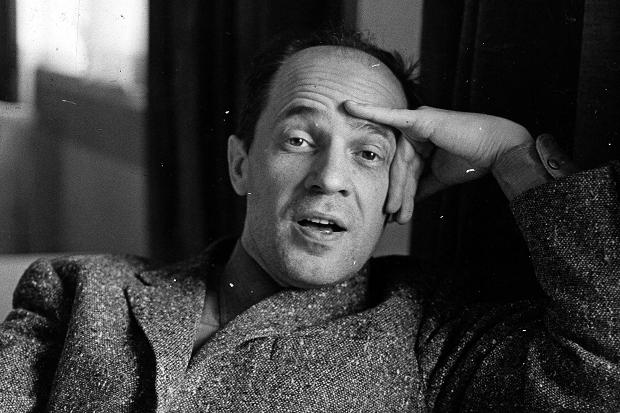 Pierre Boulez—whom I wrote about on this blog just a few short weeks ago— died Tuesday at the age of 90. I never met Maestro Boulez, but today, listening to his music and his Bruckner 8 recording with the Vienna Philharmonic (a favorite), I was reminded of two stories I thought I’d share here.

One is an anecdote my teacher told me. She’s a violinist in the CSO, meaning she’s worked closely with Pierre Boulez over the years. (Boulez was named principal guest conductor of the orchestra in 1995 and held the title of conductor emeritus upon his death.)

Her most vivid memory of the maestro is rather at odds with Boulez’s granitic public persona. Roughly paraphrased, she told me the following:

“Have you noticed that music, more than anything else, has a way of ‘getting’ you when you least expect it? Once, Pierre Boulez was conducting us [the CSO] in a performance of Mahler 2. And wouldn’t you believe it—I looked up during the performance and noticed that tears were running down his cheeks. To this day, I don’t know what it was that made him cry, but something about it must’ve caught him off-guard.”

Then, a miraculous dream I had in November: I was embedded in the ranks of an orchestra, standing and facing the conductor. None other than Boulez was on the podium. Whatever he was conducting evoked the orchestral version of Ravel’s Une barque sur l’ocean, but was more immersive, more organic. Whatever it was, I felt utterly engulfed by the music; in that moment, nothing else mattered but the sounds of the orchestra. I woke up unable to remember what the piece sounded like, but Boulez’s image—stoically set jaw, minimalistic gestures and all—was embedded in my mind.

That morning, I listened to John Luther Adams’ Become Ocean for the first time. My dream had been a near-premonition: in the piece, I heard everything I’d felt the night before and more. Later that month, when I got the opportunity to speak to Adams for the Miami Herald, I impulsively told him about my dream.

“Oh, Hannah, that’s wonderful; I love that,” he cried. “And Boulez would be a great interpreter of Ocean, too.”

Unfortunately, that hypothesis remained untested, as did the Waiting for Godot hypothesis, and the countless unfulfilled revisions of Boulez’s own pieces that were surely in the works.

What a shame that is. But—what a life. 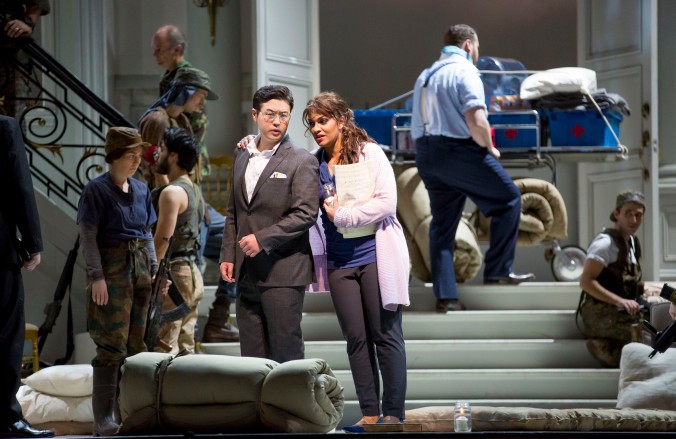 *WARNING: Spoilers ahead. Read at your own discretion.*

Before the premiere performance of Bel Canto, I was wandering around the grand lobby of the Civic Opera House when I ran into some friends from WFMT. They were asking patrons why they were attending the performance, then collecting soundbites from their responses for a segment.

My answer was easy: When you have the opportunity to attend the world premiere of an opera, you go—especially a show as anticipated as Bel Canto. Billed as a dream collaboration between Lyric Opera music director Sir Andrew Davis, creative consultant Renée Fleming, director Kevin Newbury, Pulitzer Prize-winning playwright Nilo Cruz, and upstart composer Jimmy López, Bel Canto would also be the notoriously conservative Lyric’s first commission in more than a decade.

In the end, Bel Canto didn’t quite meet its hype—how could it’ve? But it was certainly memorable, not to mention a laudable showing for López and Cruz, who made their first foray into opera with the commission.

END_OF_DOCUMENT_TOKEN_TO_BE_REPLACED

As previously reported on this blog, the University of Chicago and the Chicago Symphony Orchestra collaborated on an all-day, citywide event which brought Bach’s music to neighborhoods all across Chicago. That “Bach Marathon” came to fruition last Thursday, featuring performances by ensembles from the Civic Orchestra of Chicago in numerous community locations.

END_OF_DOCUMENT_TOKEN_TO_BE_REPLACED

The Arts Incubator, at the corner of Garfield and Prairie in Washington Park.

This Thursday, the CSO and the University of Chicago are collaborating to put on a citywide “Bach Marathon,” with most performances taking place in neighborhoods on Chicago’s South Side.

I had the good fortune to attend a planning session for the event last month at the University’s Arts Incubator. The Incubator is the brainchild of artist Theaster Gates, who represented the University (Director of Arts + Public Life), while Yo-Yo Ma represented the CSO (Judson and Joyce Green Creative Consultant).

I was totally blown away when I read The New Yorker‘s piece on Gates in high school. Meeting him alongside one of the towering musical personalities of our age was unforgettable. 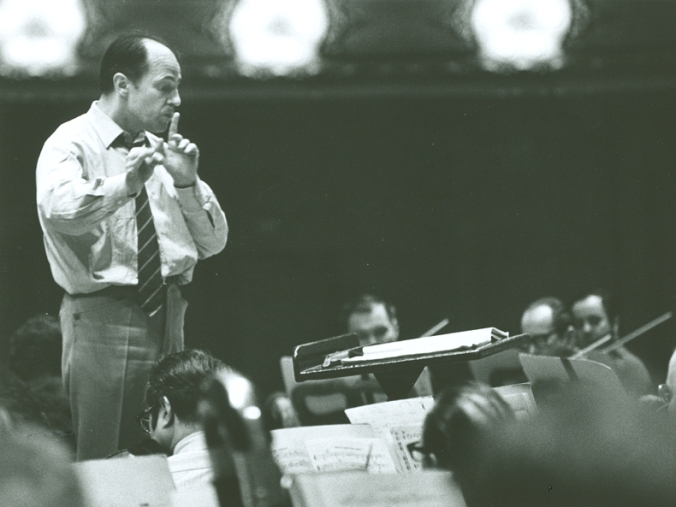 Pierre Boulez in rehearsal with the Chicago Symphony Orchestra, February 1969. (Courtesy of the CSO’s Rosenthal Archives)

We’ve all probably sick of hearing the pathetic but reassuring trope “You win some, you lose some.” For an upstart journalist, the cliché transposes to something a little more tangible: sometimes you’re picked up, and, well, sometimes you’re not.

I recently revisited a dual review I’d written a year ago, which critiqued both a CSO program curated by Pierre Boulez and the CSO’s Beyond the Score production on Boulez himself. I submitted it to the Chicago Maroon‘s arts section and, for one reason or another, it never ran. (The reason given to me at the time was that it’d simply been lost in the black hole that was—and still is—our column’s email inbox.)

Even though it never saw the light of day, I think the process of writing this particular review was what really got me hooked on music criticism. As a total novice in twelve-tone music, I found Boulez’s music hypnotizing, overwhelming, and baffling all at once—enough to make me hunger to hear more, and to know as much as I possibly could about something I knew next to nothing about.

It sounds bizarre, but that insatiable curiosity—coupled with the persistent feeling that I’m in way over my head—is still what keeps me going. It did a year ago, and it does now, only doubly so.

The review is below:

END_OF_DOCUMENT_TOKEN_TO_BE_REPLACED 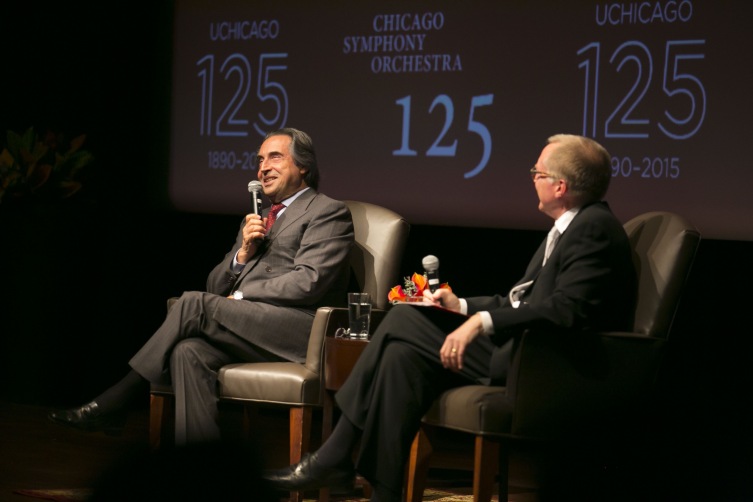 Last week, we Dia[loge]s authors had the experience of a lifetime: interviewing CSO music director Riccardo Muti before his public appearance at the University of Chicago’s Logan Center for the Arts (pictured above, alongside Philip Huscher). You can see a picture of MJ and me with the maestro on our “About” page.

During Muti’s five years as music director, the CSO has visibly increased its civic outreach and seen an idiosyncratic shift in programming, which emphasizes neglected pieces from the 19th- and 20th century (especially during this season).

Muti spoke to both of these during his time with us, articulating what an orchestra’s role in society should be and defending his programming against critics dismayed by the lack of contemporary music.

It was an unforgettable conversation. You can read the published interview here.

“Music was no longer a metaphor for the real world somewhere out there. It was becoming the opposite. The ‘out there’ stuff was the metaphor and the real part was, and is to this day, the music.”